PowerPoint is not bad, it is bad choices of presenters that make for boring presentations

PowerPoint is not bad, it is bad choices of presenters that make for boring presentations

Approximately 96% of presenters use PowerPoint. Some 20 years ago, the program was heavily criticized (i.e. ‘PowerPoint is evil’). Nowadays the criticism seems to have mostly disappeared. But is that justified?

Some say that PowerPoint accomplishes what earlier technologies did only more efficiently and stylishly, but others claim that just as the introduction of email changed communication, PowerPoint is having some far reaching consequences. We claim that it is not the program itself, but the choices of presenters who cause presentations to become less engaging than they could be. The major problem being that we have to look at slides full of text and listen to presenters who turn their backs towards us and read the texts on the slides out loud.

Slides with text is bad for information processing 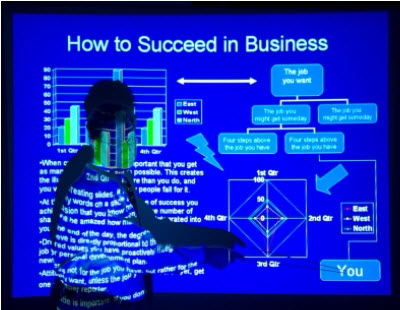 Certain characteristics of PowerPoint, such as the default-settings and the ability to use the slides on the internet and as handouts, often tempt the presenter to increase the amount of words on slides. Some of them might use the text on slides as speaking notes. Slides with text, however, combined with speech, can have a detrimental effect on the information processing of the audience. The excessive use of text on slides is not a detrimental feature of PowerPoint. It is not necessary to use text on a slide; the option to use only pictures is be advisable in many instances. The problem is that existing design principles are not intuitively understood by presenters, and are often violated.

Simply looking at the slides doesn’t do justice to the complexity of the PowerPoint presentation. One should also take into account the relationship between the deck and the presenter and look at PowerPoint presentations as a ‘performance,’ in which all the different elements such as speech, text, pictures, design, and pointing activities interact. The difficulty for the presenter is to create cohesion between the different elements, and steer the attention of the audience in the right direction, whether it is a line of text or (part of) a picture.

We often see though that the presenter turns away from the audience, breaking eye contact to introduce a slide or to point at something on the screen. Introducing slides and focusing the attention of the audience on certain aspects of the slide verbally works much better though. This, however, needs to be trained is our experience.

Learn how to apply the principles of good design

Unfortunately presenters do not intuitively know how to apply principles of good slide design or communication rules. They make conscious or unconscious decisions regarding these two elements which are often not effective or appreciated.

Is PowerPoint an effective tool for presentations? When used according to cognitive communication principles there is no reason to doubt its overall usefulness. It is clear, however, that the program elicits certain behaviours that are not appreciated by the audience nor effective. We feel that training presenters to use PowerPoint can improve their presentations enormously.

Based on: PowerPoint: from dubious default to detrimental decisions. (Download the full article as PDF) 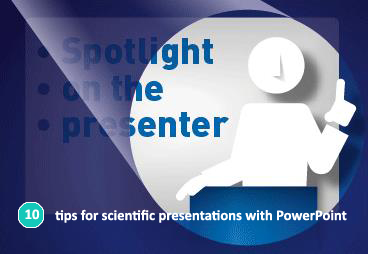